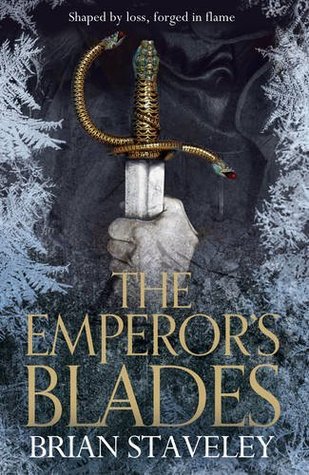 Book one in an epic fantasy of intrigue and empire, for fans of George R. R. Martin and Douglas Hulick.

The circle is closing. The stakes are high. And old truths will live again . . .

The Emperor has been murdered, leaving the Annurian Empire in turmoil. Now his progeny must bury their grief and prepare to unmask a conspiracy.

His son Valyn, training for the empire’s deadliest fighting force, hears the news an ocean away. He expected a challenge, but after several ‘accidents’ and a dying soldier’s warning, he realizes his life is also in danger. Yet before Valyn can take action, he must survive the mercenaries’ brutal final initiation.

Meanwhile, the Emperor’s daughter, Minister Adare, hunts her father’s murderer in the capital itself. Court politics can be fatal, but she needs justice. And Kaden, heir to an empire, studies in a remote monastery. Here, the Blank God’s disciples teach their harsh ways – which Kaden must master to unlock their ancient powers. When an imperial delegation arrives, he’s learnt enough to perceive evil intent. But will this keep him alive, as long-hidden powers make their move?

This has a lot going for it, but it didn’t work for me. I never got interested enough in the characters to care what happened to them. They are very flat and unreal. The two brothers have the same personality, just in different settings. Even though one’s in a monastery and one’s in Special Forces-esque training, they have similar experiences, most of which can be summed up like this:
Brother: I have a question. (states question)
Mentor/Teacher: YOU MORON! (beats up brother with blunt object)
As for the women, they’re all very cliched. Does the author know any women in real life? They’re all either super hot and curvaceous assassins or bitter and mean lesbians or defenseless whores. The sister gets four scenes in the whole book, adding up to about 15 pages.
There are tons of names (people, places, things, concepts) that get thrown at you all at once. Other writers are better skilled at spreading out the info-dump. Or maybe I’m just getting too old to take in that much information at once. The swearing felt excessive in this book—the blend of  modern-day language and made-up swear words was jolting. Just pick ONE, okay? The modern-day swearing also felt out of place in a fantasy setting.
It takes about three-fourths of the book for the heir to find out his dad died. We never get a clear description of these giant birds that this special army uses. There’s a partial description half-way through the book.
Oh, and you know how in mysteries there’s a really obvious bad guy, and you move on to find the real bad guy? Here, the obvious bad guy is the real bad guy.
The positives: Um, it’s very creative, and the little adventures are interesting sometimes. The editing is well done, especially the punctuation, although sometimes a wrong word is used (apprehend instead of comprehend; notched instead of nocked; the wrong character name used).
Advertisement

6 thoughts on “Review of The Emperor’s Blades by Brian Staveley (Members review by J. Audrey Hammer)”