What I have for you this time is a Trilogy, and the start of another trilogy. First I am going to recommend a set of books which I read a couple of years ago. That would be the Night Angel Trilogy by Brent Weeks. I was reminded of this trilogy as I have recently begun read The Lightbringer series by that same author, which is also looking like it will be fantastic.

Anyway… The Night Angel trilogy follows our little orphan Andy – Kylar, who becomes the student/prodigy of the world’s greatest assassin, one Durzo Blint. I should say now that if you are turned off by things like rape, and lots and lots of violence this one will not likely be for you, as there is rape…and lots and lots of violence. This trilogy was actually originally released in a curious way. The entire trilogy had been written and edited, then each book was released about a month apart, so there was no waiting years in between books, which was FUCKING AWSESOME (cough cough Martinfuss). As always I can go into detail about the plot but I won’t, because I don’t want to spoil anything. However, I will say that there is a portion of the second book involving a pit, in a dungeon, that was very intense and possibly one of the worst (coolest) dungeons I have come across in my reading. Even though I am only about 100 pages into the Lightbringer series I can tell that Week’s writing has gotten better since the Night Angel Trilogy, which isn’t to say that it was bad to begin with, just that he has gotten even better (expect a Lightbringer recommendation in the future).

My second recommendation comes after reading only the first book so far, so I can’t concretely say the next two will be as good, but I can’t see how they won’t be. That books is The Winter King by Bernard Cornwell from The Warlord Trilogy. 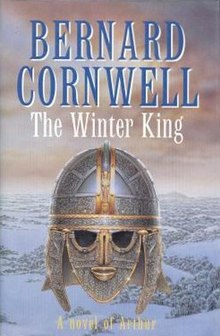 It is a version of the Arthurian legend that takes place around 500 A.D. (ish) and is told from the point of Derfel, a soldier, then lord, under the warlord Arthur. Much of the book revolved around the relationships between the British pagan’s and the post-roman Christians, which really adds an interesting dynamic. The story is told back and forth between the present, where Derfel is now a Christian monk and the past, where he recounts his days with Arthur (when he was not a Christian). I really enjoyed the narration by Derfel and felt quite a connection with him throughout his journey. There is plenty of action and we get to see many of the names we all know from Arthur’s Legend. We see appearances from Lancelot, Galahad, Guinevere, and of course Merlin. For the most part Merlin is awesome as shit in this book when he is around. He is a mysterious, feared and revered figure in and around Britain and its surroundings. As always I won’t spoil too much because I would rather have you experience it for yourself. I will say I took a long time to read Cornwell and regret that it took me so long.

Thank you for reading another Sir Lancer Recommends and I will see you all in the next episode!